Took the drive north from Tofo a couple days ago up to another coastal destination, Vilanculos. This seaside spot serves as the arrival airport from Johannesburg and also as the embarkation point over to the beach lodges and resorts in the Bazaruto Archipelago. Came out to the Bazaruto spots a few years but did so only via air and then a short boat ride out to the islands where I visited Indigo bay, Marlin Lodge, Benguerra Lodge and a few others. 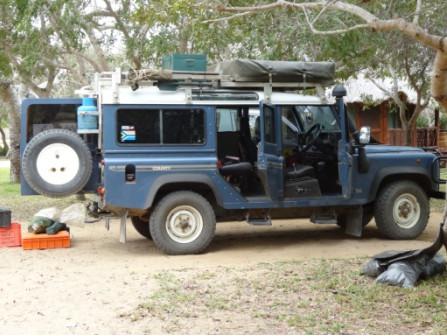 The luxury of having a car and some contacts is again very helpful. Made the 200 mile journey with very little issues. Had to ask for some directions on the way out of Imhambane just to get on the main highway. I have a map with me but between reading the street index and remembering what Mike had told me I was already a little confused, but a healthy confused. Asked a local guy near the ferry to Maxixe for directions. He was happy to practice his English and sent me on my way. About 30 feet down the road I heard a whistle and the same guy came running back. Thought I had the wrong directions. Turns out he was looking for a ride to Maxixe. Figured I could use a little company and someone that knew the shortcut to Maxixe so onboard came Alberto Rego, a 41 year old father of 8 and looking to head to Maxixe to attend a party of some college student friends. Stopped along the way at the shortcut to buy my host in Vilanculos, Nick Falk, a big clay pot for his garden per Mike’s recommendation.

Good to have had Alberto with me as he filled me in on some needed advice for driving in Mozambique – speed limits, police stops, etc. Alberto was eager to practice his English and we managed to cover a number of subjects on the hour ride to Maxixe. When I dropped him at his destination across the street from the ferry I saw that Imhambane was only about ½ mile on the other side of the bay. Alberto saved 10 meticals or 35 US cents by driving with me. I enjoyed the company but I am not sure how much he saved as our drive took an hour versus a 15 minute boat ride. Maybe he wanted to practice his English. Who knows. But it is always a benefit to have a local in the car. I learned a few things and he gave me some needed advice on driving.

Drive was pretty uneventful up to Vilanculos – one small village after another. Tofo and Vilanculos attract plenty of foreign tourists. He coastline in between is dotted with smaller villages where there are a smattering of vacation houses of South Africans. 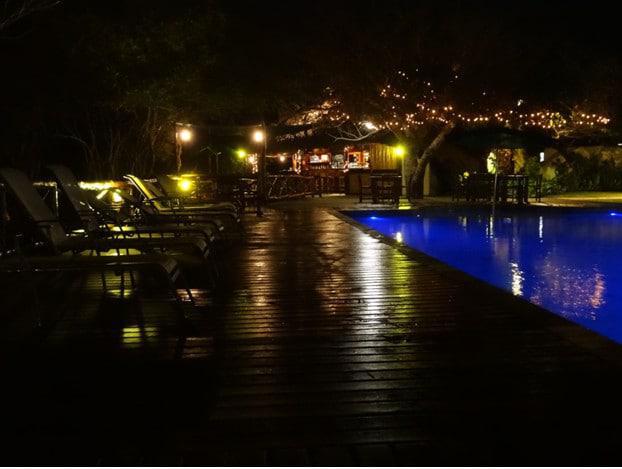 Pulled into Archipelago at about 5:30 PM and met Nick down at the bar. The bar/restaurant/pool area is set right on the edge of the high sand dunes. He and Norman are the resort managers and both from Zimbabwe. Like many Zimbabweans they had to leave their country during the last 10 years when inflation became rampant, the highest in the world. Prices were changing as much as 3 times a day. Locals were literally using wheelbarrow loads of Zimbabwean dollars to pay for basic items at the grocery store. Not until the government finally accepted the demise of its currency and adopted back the $US did prices stabilize. But for people like Nick who had paid into a government pension in Zimbabwean dollars, their retirement funds were now wiped out. Nick is 68 years old but collects a retirement of but $25 a month because of the wrecked economy in Zimbabwe.

Impressive setting sits Archipelago high atop the sand dunes looking over the ocean. 30 minutes after arriving I took a look east and saw the full moon rising out of the ocean. Could not resist the temptation to spend the next 30 minutes or so taking photos with my newly purchased camera. Glad I purchased this camera as it turned out to take some stunning shots of the moon between the palm trees and its reflection to the beach’s edge.

Settled in for a big plate of prawns during supper with Norman and Nick. Prawns here are just another name for big shrimp to an American. Taste is pretty similar but I’d give a slight edge to what we pull out of the water in the waters off the east coast southern states. Nonetheless, the food was plentiful and very good. 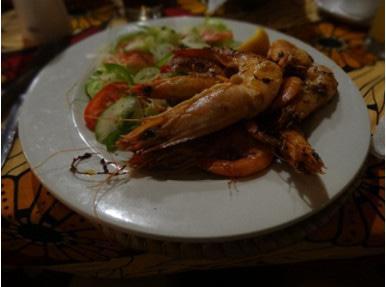 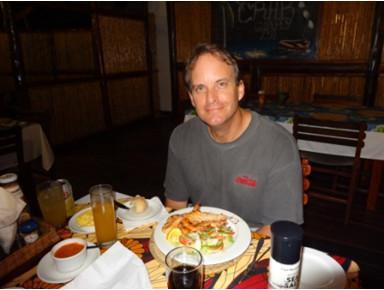 Early in the conversation Nick told me about another group of Americans who were at the resort. They had been about a year into their two year commitment as Baptist missionaries in another coastal city further north called Beira. Knowing they were Baptists I did entertain the likelihood that the group was from the south.

Close to the end of our meal up walks a fella with his computer. He only got about 3 words into his delivery when I realized he was from near my hometown. When I took a harder look I saw his baseball hat emblazoned with the logo of ECU (East Carolina University) which is in my hometown of Greenville, NC. I’ve been a part of some small world stories but this one might now well rank at the top. Mike Edwards introduced himself and told me about his having been born and raised in Pitt County and having lived in Rocky Mount prior to his and his family’s departure for the shores of Mozambique.

Mike invited me over to his place so I headed that way about 9PM. We stayed up for a couple hours talking B’s BBQ, Cubbies and Ficklen Stadium. Mike and his wife are the proud parents of 5 children, ranging in ages from 17 down to twins of 12. Must tip my hat to the manners of these children. “Yes, sir” – “No, sir”. Their behavior reminded me of my own youth when children stood up when grownups entered the rooms and knew to call a person their senior, “Mr.” or “Mrs.”. In addition to this sacrifice to come so far to preach the Gospel to the poor of Beira, Mike’s wife, Cindy, home schools her 5 children.

Greeted my newest Mozambican/Pitt County contacts good night and headed for bed. The pillow was much appreciated.

No trip is complete to Cape Town unless the icon of…

Today would be our last day in the bush and we…

Today treated us to our first day of overcast skies since…