Was out in Los Angeles last month and could not help but notice the similarities between its topography and weather and that of Cape Town’s – rugged coastline, sandy beaches, quick elevation into the hills and mountains overlooking the sea, warm days and cool nights. No wonder why so many South Africans try to flock to the west coast should they take residence in the US.
END_OF_DOCUMENT_TOKEN_TO_BE_REPLACED
These visuals were only further supported after yesterday’s hike up to Table Mountain National Park.

At about 8AM, my hosts and friends, Ian Alexander and Louisa Potter, along with their children Juliet (9) and Will (6), had me join them and a few others on a walk up the back side of part of Table Mountain. Also in our group were Penny and Simon Waterkeyn and their three children Thomas (14), Lilly (10) and Bunny (6). Simon’s brother, Antony, also came along as did Alice and her daughter, Emma. We had a large group in tow but what proved to be a resilient group. 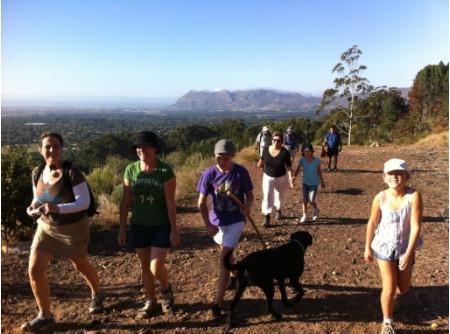 The hike began in the parking lot on the south side of Table Mountain at Cecilia Plantation at about 8AM. I’ve been on a number of hikes here with my friends and they all offer exceptional vistas stretching out across the valleys and nearby seashores as we ascend higher in elevation. Simon brought along his GPS which was outfitted with an altimeter as well as a means by which to gauge our traveling distance – both very helpful tools when setting out to enjoy what Table Mountain has to offer.

Ball park estimate was that we would be on a 3 and ½ hour hike but given the ages of some of the younger ones in the crowd we thought the journey might take a bit longer. I’ll say “a bit longer” only because the populace of Cape Town has shown itself to be an active one by American standards, most active by American standards. Take out a bunch of American children for this hike and there would be some dissension in the ranks.

Yet another beautiful day greeted us as we began our slow and scenic ascent. Great care had been placed in creating the path we took. Wooden steps were cut into the side of the hills as the slope grew steeper after about a half hour of easy walking. Not to forget the three dogs we had, they proved to be fine companions at the outset, making sure we were all keeping a constant gait to our efforts.

As I predicted, the hike became ever increasingly more challenging. What was lacking in the depth of the steps was made up in height as we climbed and weaved our way higher and higher. 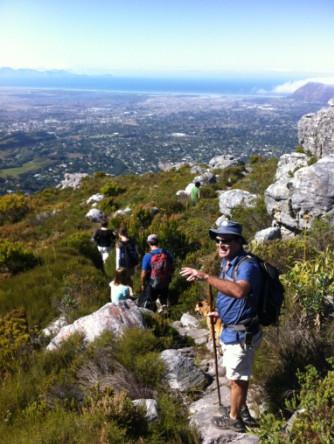 We took a number of breaks along the way and broke open into the sunshine to be greeted by views cast out over the cloud topped Chapman’s Peak and Noordhoek beach in the distance. The late summer lushness of Kirstenbosch Botanical Gardens lay out beneath us. This city and its surrounds never disappoint.

The company proved worthy, as well. Alice had spent 4 years living in New Zealand and given my curiosity about that country, I was able to have a lengthy conversation with her about the pros and cons of living there. She had resided in both Auckland and Wellington. Her commentary was filled with nothing but glowing support for where she called home – friendly and few people (only 4 million people), abundance of nature, not expensive out of the main cities and very little crime. The only negative she reminded me is that New Zealand is so far from the rest of the world but we both quickly agreed that sole negative could well be a positive in that the country is not overrun with inhabitants and tourists.

Antony, Simon’s brother, was also of good information and conversation. Trained as an engineer, he has spent the last 25 years traveling Africa to concentrate on his work of water projects, reclamation, irrigation, etc. He and his wife have 3 children (a son in Cambridge, England with an Italian girlfriend, a daughter in Italy with an Italian husband and a son working aboard a privately owned ship in the Mediterranean Sea. Antony and his wife also own a house in the mountains of Italy and “own” a property in the Vunga hills near Mutare in Zimbabwe. Sadly, his property in Zim has been confiscated by the government in what continues to be a challenging country to live given the regime of Robert Mugabe is still in power. My travels in 2010 took me to Mutare when I had the pleasure of meeting Lyn and Ros Rogers, the parents of Douglas Rogers and the protagonists of the book he wrote about their plight titled The Last Resort. Needless to say, Antony and I also had much to discuss. 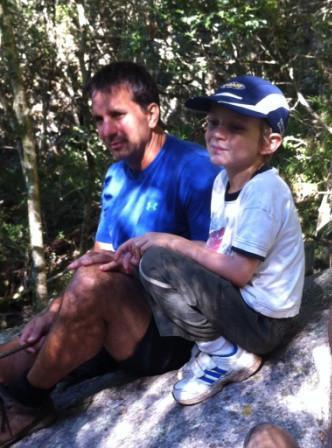 As with most hikes of ascent, the thought of reaching the summit is paramount to the mind. The climb was taking its toll on all of us but I could not help but think how well the children were performing. For every step we took up must have seemed like a Jack in the Beanstalk step for the younger ones in the group. They performed admirably and probably more ably than the adults. Hardly a quiver was heard for a break from them. We found the adults waiting on one another.

With each step up it was hard not to take a look over a shoulder to catch another glimpse of a clouded mountain top or a wave ridden ocean. As an East Coast American, I had to remind the group we do not enjoy the combination of mountains and sea in the same vista. Despite my now traveling here for a dozen years I have yet to grow tired of the views afforded.
We reached the summit after our line of weary warriors was strung out a few hundred feet up the path. There at the crest we were met by a troop of local Boy Scouts, they having overnighted the prior evening and were on their way back down.

Walking flat across the top of our destination was welcome for the muscles, knees, lungs and eyes as the unbounded views now stretched out across a 360 degree landscape. The eating hour was fast approaching so we took refuge in a nice shady spot to charge up on a few calories.

There in the short distance sat what always strikes my favor here in South Africa – a well built dwelling offering quite comfortable accommodation along with views which should command a high dollar. A stone cottage, complete with fireplace, was sitting adjoining the path and included a wide deck overlooking Chapman’s Peak and Noordhoek beach. Most people reading here would not give the accommodation justice as what can be seen here:

Fully equipped kitchen, rooms to sleep 8 and linens are provided, all for $30 a head. Could not imagine a better spot to look at the Milky Way by night and follow up with a morning coffee brew with no reason to leave the front porch. 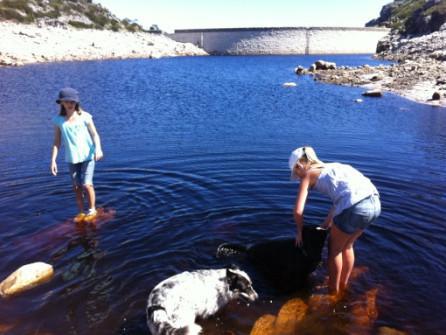 Not to be underwhelmed, we then walked the 100 yards down to the water reservoir and stuck our feet in the cool liquid – an overdue refresher for our cooped up feet. The gaggle of little ones on our trip wasted very little time in submerging themselves from head to toe. The engineering feat of the original European settlers to this area is to be highly commended in their construction of this reservoir and a number of others here atop Table Mountain. These captured winter waters are what allows all of Cape Town below to continue to have running water all the year long. Many of these reservoirs were built over 100 years ago – a marvel today but an even more formidable accomplishment in the 19th century.

As is the case with all hikes, traversing the trailheads downwards lends itself to a quick arrival at ground central. Clock read 2PM upon arrival. We had been hiking the mountain for 6 hours and what a good time it was.

On a last note, I cannot help but add that our cavalcade took in a morning adventure fit to make any native flatlander pay big money and we were back at my hosts’ house in 15 minutes. I thereupon grabbed my backpack and drove the 15 minutes down to Camp’s Bay beach for an 85 degree, sun filled few hours on the white sand beach. It is these type combinations that make for calling Cape Town unique.

Out of the Kruger Park for the first time in four…

After a few days at Henk’s house gathering some R &…