My continued deference to this country’s outdoor activities is concluded in this trip’s blogs by regurgitating the mantra – South Africa is akin to an adult’s version of Disneyland. Once one adventurous ride ends, yet another one commences just around the corner. 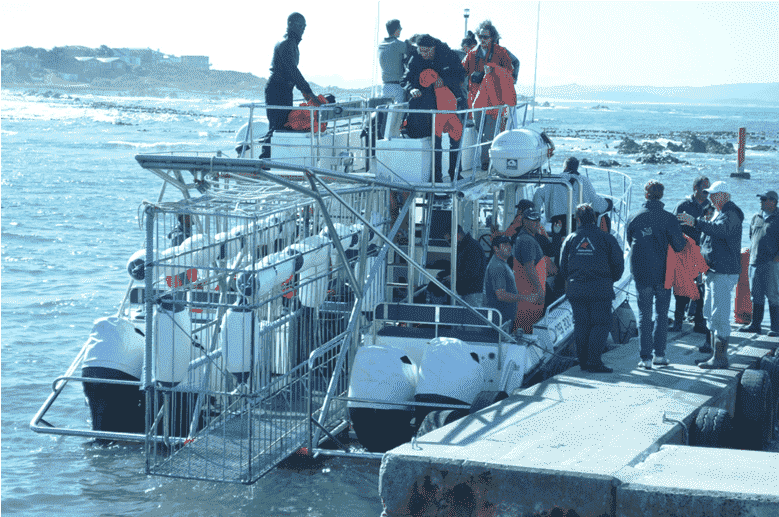 To take part in viewing two such impressive animals in such an intimate fashion should warrant a greater sacrifice than we have had to make in regards to travel. To imagine both these activities could be enjoyed from boats departing small ports within walking distance of one another seems more than hard to believe. People would travel half way around the world to enjoy these events yet we are able to take part in these unrehearsed marine shows in back to back mornings.

Our destination is Shark Alley, a strip of water surrounding Dyer Island, where Great White Sharks come to feed on the 25,000 Cape Fur Seals found on this small vestige but 3-4 miles from the Kleinbaai harbor. The spot is a bit like a fast food drive through for one of nature’s greatest apex predators.

My provider of choice is White Shark Adventures, an enterprise headed by boat captain and prior commercial fisherman, Brian McFarlane. It is of great satisfaction to me to see Brain’s success as the owner of this enterprise. Commercial fishing is a hard life. Brian is a gregarious, fit man of 61. He has the hands of a person who has worked a physical hard for a living. With hands like shovels, his personal salutation can often leave you feeling like you’ve met a man who knows his trade from experience. 23 of us boarded the 30 foot boat and headed out to Dyer Island. Given my propensity for a bout of sea sickness, I again had made a pit stop by the Hermanus pharmacy prior to our pushing off the dock. The pharmacist was most helpful in offering me three ways to ward of the terrible effects of sea sickness. The last trip I had taken a prescription called Scopamine, a patch that is placed behind the ear. Given my high likelihood of sea sickness, I swear by the Scopamine but had mistakenly left the patches at home. So, today I was on a mixture of South Africa’s version of Dramamine, some ginger candy to keep my mouth from drying out and to ease my stomach and finally the wristbands which apply the use of acupuncture point compression. I was doubtful of the concoction’s ability to stave off the symptoms but I had little choice so late in the game.

The trip out was short and Brian told us he had come into a spot yesterday where they had seen 12 different Great Whites. We were hoping for similar luck and things started out in our favor. On the way out to Dyer Island, a congregation of sea gulls on the water told Brian that food was in the water. He gunned the boat and then told us once we reached the site that a shark had just taken a seal. We were but 2 – 3 minutes too late in arriving. 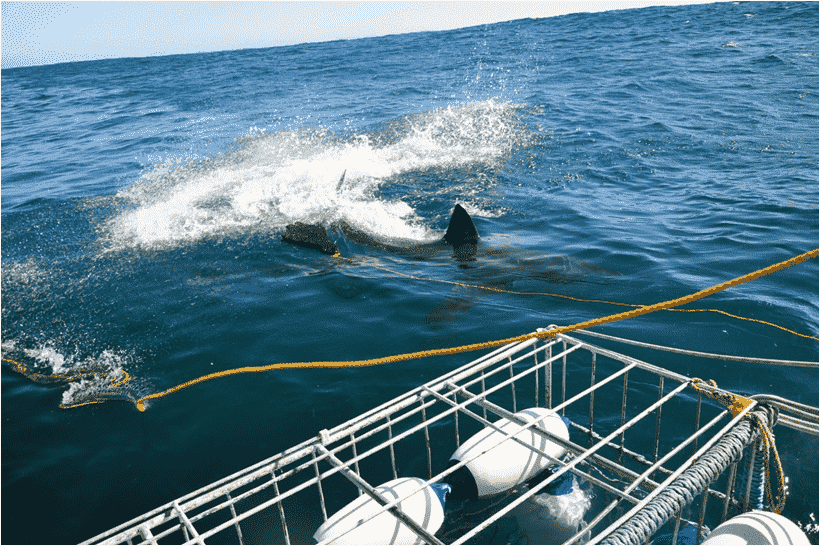 We carried on another 5 minutes and dropped anchor in some swell but in water which offered some good visibility. Before we even dropped the cage, the first shark showed up. And lo and behold, it was the shark which had just killed the seal. How did we know? The intestines of the seal were still trailing out of the shark’s mouth. The first eight people donned the wetsuits and jumped into the cage. In the time it took the divers to get into the water another couple of sharks had come onto the scene, interested in the chum and the tuna head creating an oil trail.

Tough to describe the adrenaline of seeing a predator that size in the water from the boat, let alone from the water. First time I ever went on one of these trips was with Brian 11 years ago. Never will forget his telling us all to keep a look out for sharks and to let him know if we saw anything. About 10 minutes passed and I saw some dark movement at the surface. Given its size, at first I thought the formation was but a cloud hiding a spot of sun for the moment. But about 5 seconds later I realized it was a shark.

On this trip, no such look out was needed. The first shark showed up and we were with a shark or two or three for the next 3 hours straight. The intensity of the shark’s interest varied as some came by for a chase of the tuna head and others tried taking a bite out of the seal formed cutout. All we saw the entire morning were Great Whites. Well Great Whites and some Humpback Whales breeching in the distance. Yes, that was an added feature we did not count on. 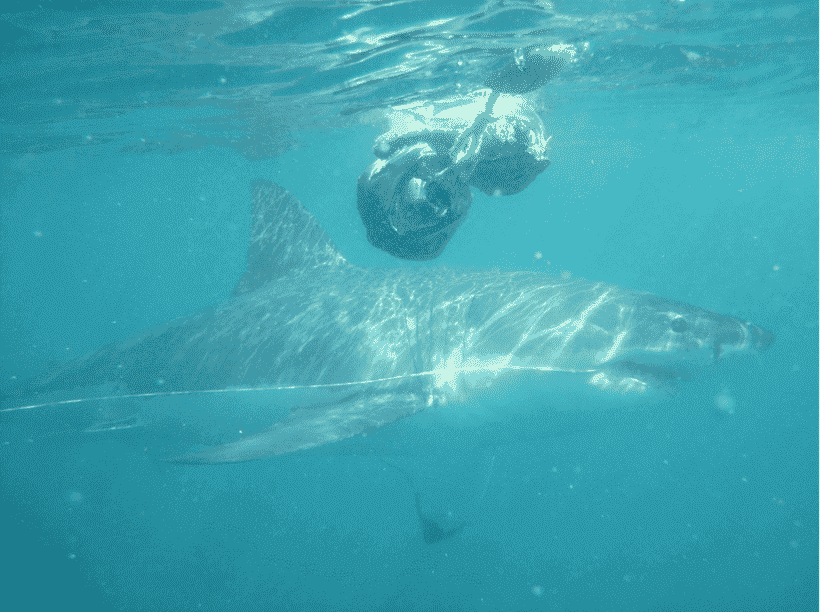 The first group was in the cage for about 30 minutes as the sharks showed no caution in coming up close to the cage. The next group of us donned the neoprene suits and jumped in. Always have maintained that Spielberg did a masterful job of creating underwater suspense in the movie “Jaws”, especially during the scene in which Richard Dreyfus is in the shark cage himself.

Now I realize the scene of identifying an approaching shark underwater is accurate. As we sit in the cage, our heads stay above water awaiting instructions from the drew as from which direction the shark is coming. Once the cry goes out for “Down Right”, we all pop our heads under the water looking to our right. Usually, nothing can be seen but small fish feeding on the chum just in front of us. After a few tries at this you realize once the small fish disappear, a shark is close but you still look right without immediately recognizing anything but a blue and green sea. And then, you pick up some slight movement, blurred at first. As your focal point begins to hone in on the movement the head appears, then a body of considerable length, often as much as 15 feet long, comes straight at the cage in pursuit of the tuna.

The first thought I have when in the cage when seeing this creature is not its rows of teeth, a few of which can cut a seal in half with one bite, not the length, but rather the girth. The animal is so wide around that it is hard to believe anything it hits is not immediately killed at least on impact. These fish look like small cars being dragged through the water. 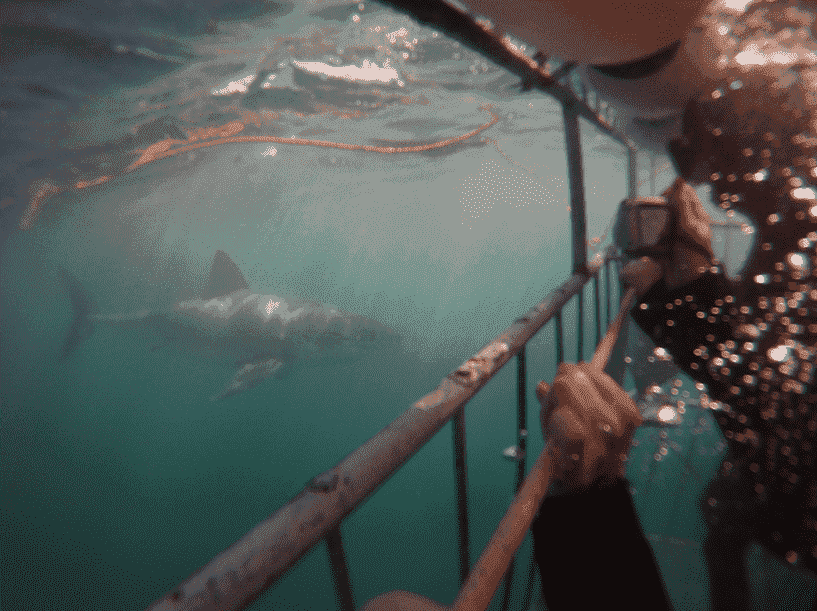 The reaction of those in the cage is always varied. Some are quiet upon popping to the surface after the shark takes a pass. Others are talking incessantly in sounds bites of superlative adjectives. Others, and the more pleasurable reactions, are often too energized to restrain themselves. Cries of excitement echo through the boat creating a stir for those both in the cage and on the boat.

The sharks just kept coming. Over and over again, for the next three hours we were met by one giant shark after another. An impressive species are these animals. Built for punishing consumption when desired it is too difficult to see how a human being struck by a Great White can survive to tell the story. They can often weigh over a ton so the threat of drowning is real even setting aside their bite. The frequency with which people live to tell the story of their being attacked by a Great White shark shows me these animals do not mean to hunt humans. If they meant to hunt man, no one would live to share their story. The animal is just too big and lethal to accidentally let its target live. I am further convinced that attacks on humans are almost entirely cases of mistaken identity and the shark often takes a bite but is so sensitive to its having made a mistake it does not bite again. Victims can then bleed to death but so many others are eventually rescued and recuperate that it leads me to believe the animal has no interest, as a primary food source, human flesh. We are just too lean for their interest. White sharks want to eat fat and as much as they can find. I had once again taken an underwater camera. Others on the boat had their own underwater cameras and I shared my email address with two others in the hopes we could swap out our photos.

When you start researching your African Safari, the term “Big 5”…

Out of the Kruger Park for the first time in four…