First stop here on the 4 day educational tour I am taking of the Isibindi Lodges found within South Africa. Was met at the Durban airport yesterday morning by Kristie from Isibindi where she drove me and my fellow two travelers, Craig Ronne and Peter Kari north to the first stop, Isibindi Zulu Lodge.

Craig is originally from Cape Town and owns a tour company based in London bringing primarily the UK market out to Africa. He serves in the same capacity as I do in my business but also has the bonus of having an office in Cape Town. So, he splits time between London and South Africa. Peter is a journalist from Copenhagen. He writes for their major newspaper, Politiken, and also writes the content for a travel digest on South Africa. The three of us are here to explore the offerings of the Isibindi Lodges. 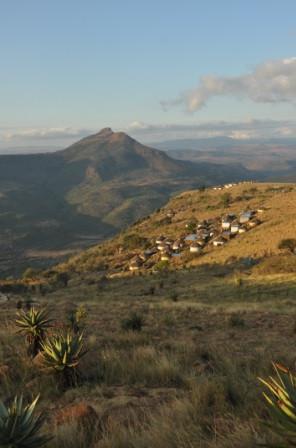 Sitting on the Indian Ocean coast, Durban is a warm climate most all the year. It is one of the few spots in South Africa that can get humid in summer. One of the benefits to the geography on this side of the country is the close proximity to the Drakensberg Mountains. We must have pulled out of Durban when the daytime temperature was to reach almost 80 degrees. Within an hour we are well up into the hills of Pietermaritzburg where the temperature begins to fall quickly. To be so close to the mountains when living in Durban is a real bonus in summer. Within 2 hours we are in Greytown and the weather has now dropped the temperature down to the low 60’s.

Up through the hills and the foot of the Drakensberg we drive. Yet another hour down the road we are met with a rain storm and subsequent hail storm. The elevation leaves the hail strewn about the pass and creates a substantial rise in the rivers running alongside us.

This is Zulu country. Famed for the movie, Shaka Zulu, the Zulus were involved in serious fighting against the British and the Dutch settlers dating back to the early 1800’s. As the Afrikaner Voortrekkers (Dutch, German and French Hugenot) left the area of Cape Town after the British took over rule in the first decade of the 19th century they ran smack into the Zulu nation in the area surrounding Durban and into the Drakensberg Mountains. Minor skirmishes started the interaction between the whites and blacks until eventually the Afrikaner leader, Piet Retief, came to meet with the king, Shaka Zulu. Retief was killed and this act set off a series of battles between the two groups. The battle of Blood River was an action which serves to be important in the history of the Afrikaner people.

Shortly thereafter the British came through and even larger, more substantive battles took place including Roarke’s Drift and others. Isibindi Zulu Lodge primarily caters to the foreign tourists interested in the military history surrounding this area.

Upon our arrival at the lodge we were introduced to our guide for the day, Mike. The lodge consists of 12 rooms overlooking the valley. After unpacking and adding a bit of lunch we set out to explore the area with Mike. 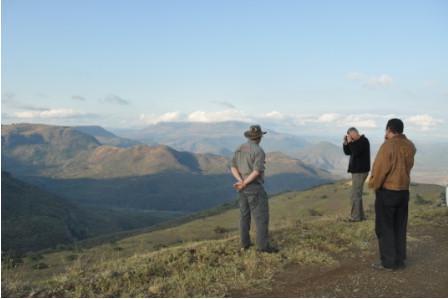 While certainly not necessary, it was a bonus that Mike spoke Zulu and could take up well into the heart of some of the Zulu villages set atop the neighboring mountains. Despite the late start to our tour, Mike proved to be a wealth of information as he spoke to us and drove through some of the more exceptional views. The British troops suffered massive losses in these battles with the Zulus early. The redcoats were not prepared for the numbers of Zulus despite having a substantive advantage in weaponry. The Zulus had nothing but spears against the rifles of the British but won decisive battles nonetheless. However, the end came quickly for the Zulus and they ended up losing 3/4 off their territory to the English by the end of the 1850’s.

Mike prides himself on getting into the parts of the Zulu villages that are undiscovered by outsiders. A couple of times along the way we stopped while Mike introduced himself to a few people in the sparse settings of the hillsides. He trades regularly for Zulu spears, shields and the like and does so by approaching the locals directly. The experience was exceptional for our group as Mike knows the people and military history of this area quite well.

Dinner was in the outdoor boma where we were shown a traditional Zulu dance and served some local homemade beer. The beer was better than what I might have expected. Dinner was eaten with Kristie’s husband, Brian, and his family. Brian’s mother, Jennifer, her husband, Clive, and Brian’s grandparents were in camp for the evening, as well.

Yesterday I took a short flight of about 45 minutes aboard…

Sitting here to a fine dinner of tomato and basil soup,…

We had a long commute from Zulu Lodge to Kosi Bay…