Some land based wildlife was calling my name since landing on the African continent and I was determined to see through the effort to answer back. 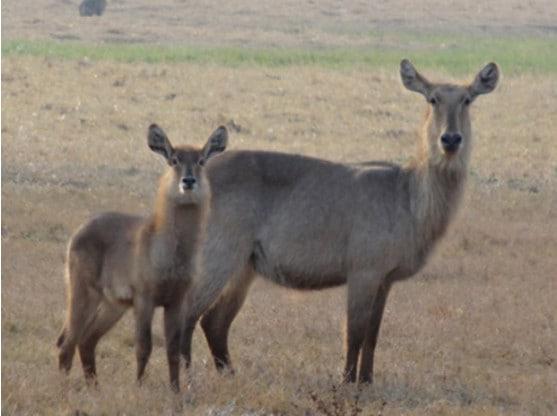 Despite this exploratory adventure to Mozambique being more about the sand and surf than the elephants and elands the history of Mozambique’s land bases animal kingdom is prolific. The parks of this country were visited frequently by Mozambicans, Rhodesians, South Africans, Europeans and Americans during the 50’s and 60’s. Ravaged by a 15 year civil war commencing in 1975, Mozambique’s national parks saw their game wiped out by the military and poachers in need of sustenance. Once game rich parks rivaling Kruger Park in South Africa and the Serengeti in Tanzania, saw massive wildlife populations of big game eradicated.

The healing process will be lengthy but it has begun. The eastern boundary of the Transfrontier Park, a wildlife reserve spanning also the borders of Zimbabwe, South Africa, is in Mozambique. The entrance is easily accessible from Johannesburg in South Africa as well as the capitol of Mozambique, Maputo. The elephants are still a bit skittish on the Mozambican side of the park given many family members were killed for their meat during the war. Yet, driving through this area a tourist can see that progress is being made. There is also the Maputo Elephant Reserve, 50 miles south of Maputo on the South African border. Despite its loss of animal life during the war, there are now up to 300 elephants in the reserve. 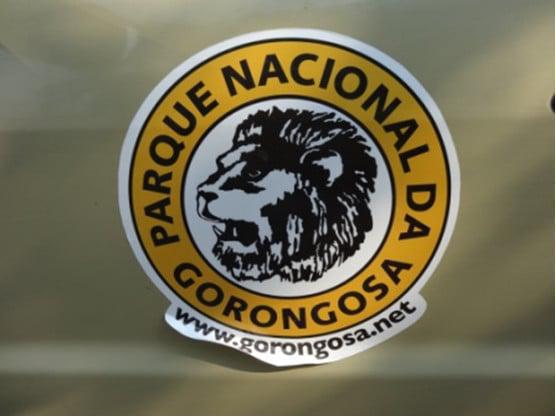 My aim was to head further north along the coastal highway to Gorongosa National Park. This reserve brought the Hollywood elite out to visit in droves in the 50’s and 60’s. It was said that the wildlife was greater in number than that of Kruger Park. Easy access from the Rhodesian border brought in other Africans to Gorongosa up until the mid 70’s.

Gorongosa has seen a faster renaissance due to the committal of $10 million by the Carr Foundation, founded by American businessman Gregory Carr in 2004. The southern portion of the park was reopened and since then two private lodges have come into the reserve. 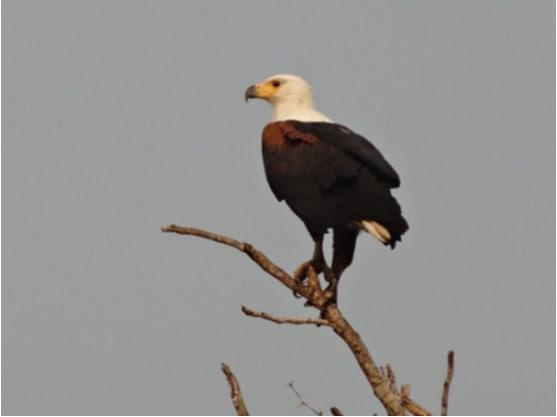 The road north is a bumpy one along the coastal highway. The further north the drive, the rougher the road conditions. Improvements have been made to the road starting in Maputo and heading north but I am a full 600 miles north of the capitol. Adding a bit of intrigue into the mix are the roadside vendors selling everything from live chickens to cashews to Cokes to gasoline. They have nothing but desire and perhaps a shade tree to call a viable business and as you approach the merchants there is nothing but respect you can offer for their efforts as they will step right into the road to advertise their product. In addition, there are a plenty of locals using the far edges of the roadway as a foot and bicycle path.

It was questionable as to whether I could have made the drive up to Gorongosa given some transportation issues but the small world story many of us share kicked in. A friend from high school lives in Johannesburg. The morning I was considering my options to get to Gorongosa I saw on Facebook that Clay was driving north through Mozambique. Until I took a hard look I did not realize he was passing right by me in Vilanculos. There is only one main road through Mozambique so that was not much of a coincidence but to have the timing be such that a high school classmate would be driving through Mozambique and right past me when I needed a ride was more than a fact worth deliberation. To top it off he was but 45 minutes away. In the end, I was able to sort out my own vehicle but Clay was about to deposit me about 30 kms from the gate of Gorongosa.

After a drive of about 270 miles over less than ideal surfaces I entered into the dirt road to Gorongosa. My decision to come north had been hasty and I had not made a reservation. Such a decision would not be as much of a problem in and around Kruger Park or any South African game reserve as accommodation abounds. At Gorongosa there are really only 2 options and I already had been told by the private operator, Explore Gorongosa, that they had no availability given the president of Mozambique’s wife was at their camp. 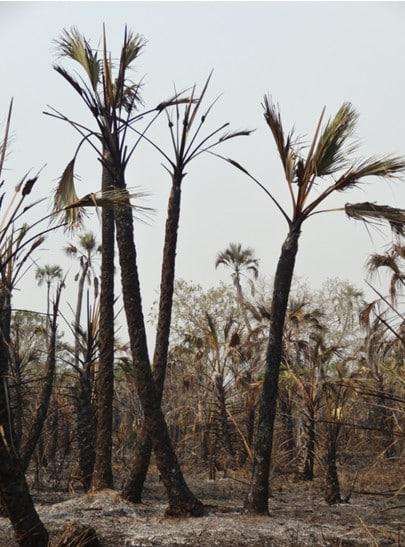 It was approaching dusk as I pulled down the dusty and bumpy trail. The landscape was flat and heavily laden with thick palm trees. Met a few Afrikaans bikers on their way into the camp. Upon arrival I was happy to find out that a room was indeed available. I was a bit lucky as the place looked to be pretty well booked up – perhaps with a total of about 40 – 50 people in the camp. The rondavel accommodation had recently been upfitted so the rooms were better than what I was expecting. Oddly enough the camp, Chitengo Camp, had WIFI that offered as strong a signal as any I had experienced at home or in Africa. Here I was well in the remote bush of Africa and the WIFI signal was faster and stronger than what I might find at Panera in Atlanta. Satellite signals in Africa, even when not shared, do not usually provide such strength and clarity.

Drove myself into the reserve the next morning. Had heard from many people further south in Mozambique that Gorongosa was lacking in numbers of animals so my expectations were not high for big game viewing. Yet I had also heard the park was on the rise so the visit was needed.

I did not know what to expect for vegetation but the south side of the park where I entered had seen some recent fires come though. These burns reveal parts of the bush that often cannot be seen and it is easier to spot animals. The landscape was flat, flat and laden with palm trees. In the area that was not burned the dry grass was shoulder high. The roads were well cleared. Just as can be the case when told challenging information about limited game viewing, I was lucky enough to experience the opposite in the first hour. Gorongosa is not a heavily visited park so I was driving on my own with no other cars in sight. To my left I saw some movement and stopped the car. 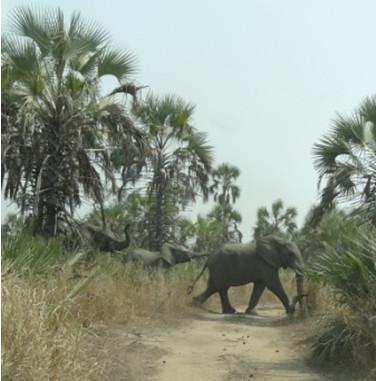 Moving at a speed which would run down a man was a herd of elephant parting the 5 foot high grasses. Running single file, they crossed the road trunk to tail and kept on coming. They were but 30 yards from me and clearly saw me. This sighting was different than any other elephant encounter I had been a part of. These elephants in Gorongosa are still very wary of humans and vehicles. During the civil war many of their family members were killed and most of the remaining adults may well have bullets still lodged in their bodies. These guys were moving with a purpose. They ll probably got across the road in 30 seconds but the opportunity to see wild elephants in a full sprint was unique to me. As fast as they appeared they disappeared into the high vegetation to my right.

Good start to the game viewing.

I was only to have one day of game viewing at the park so I made the most of it by spending all day in the park aside from a needed lunch break for about an hour. The north side of the park offered something altogether different as the palms and thick vegetation gave way to the wide open plains and full vistas of something akin to the Serengeti. Plains game including the largest number of waterbuck I have seen, warthogs at every turn, bushbuck and more. The mountain range that is part of Gorongosa could be seen in the distance and while this portion of the park is not yet accessible, I could see how the combination of wildlife and topographical diversity could offer something to compete with the best game reserves in Africa in the coming years. 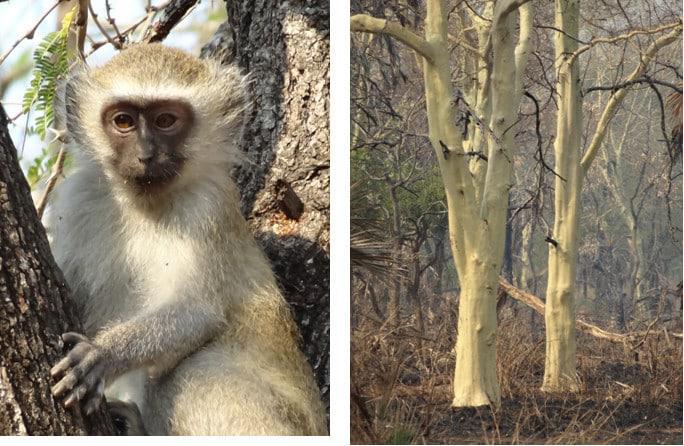 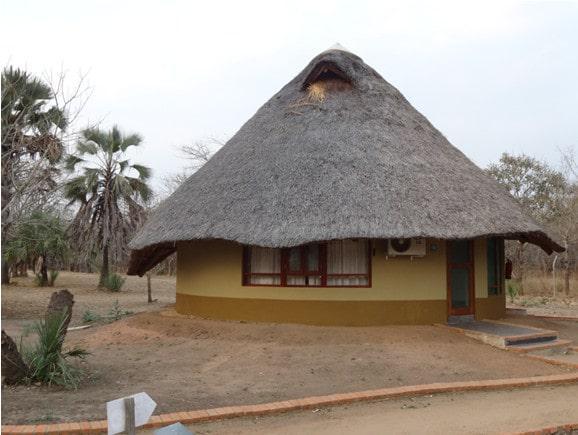 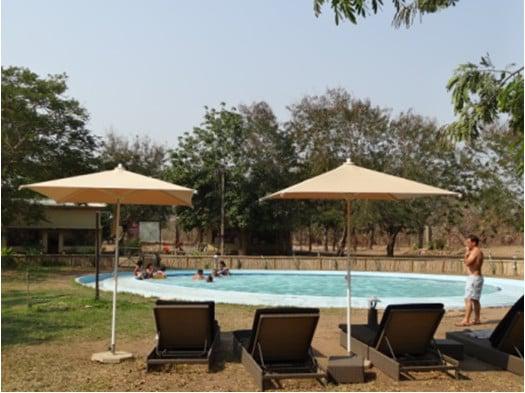 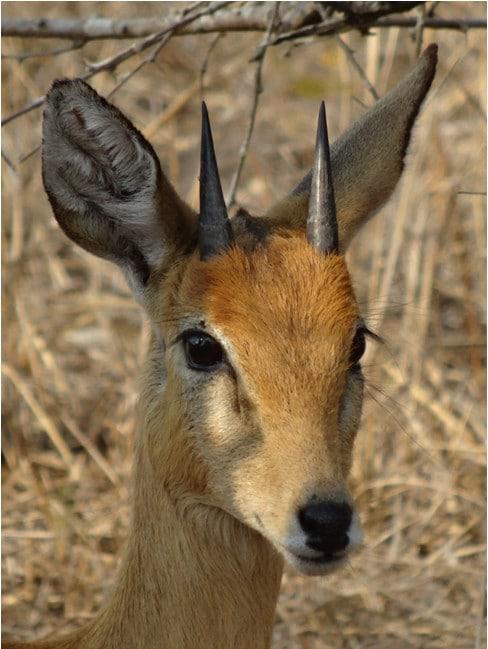 The last night in the Kruger Park was spent exploring another…

We had a long commute from Zulu Lodge to Kosi Bay…